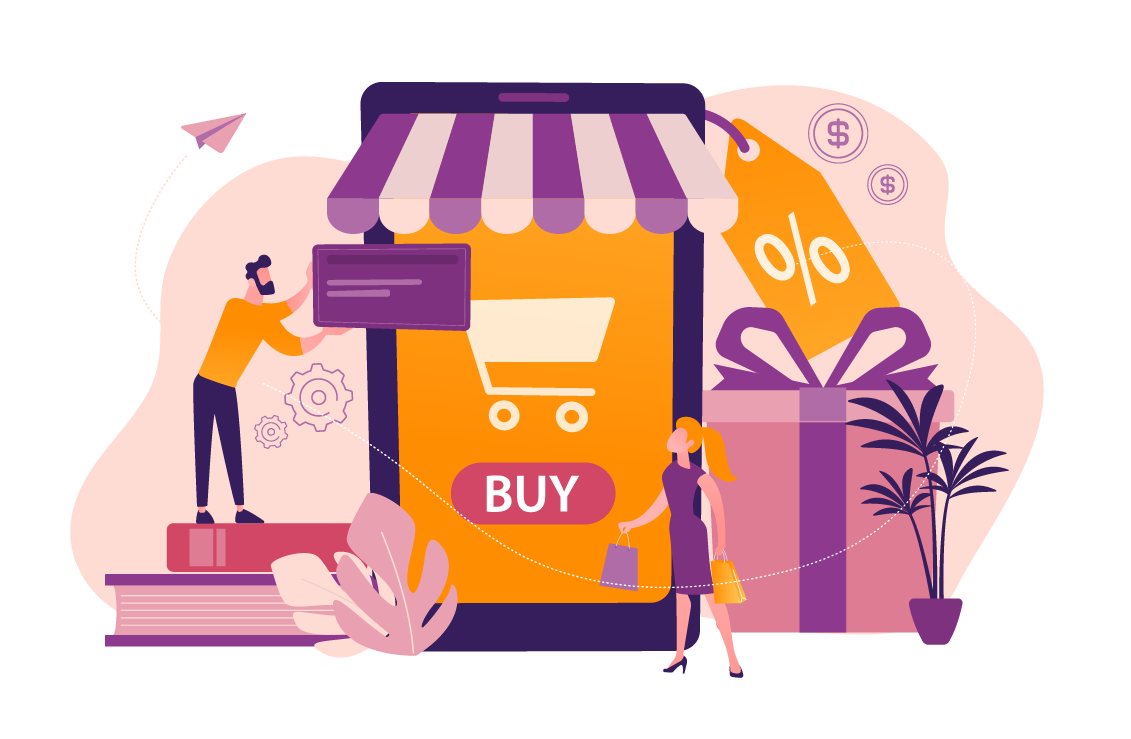 The True Value of In-App Purchases
By Amir M. in In App Purchases
May 06, 2022
In this article, you’ll find out how best to promote your in-app purchase to maximize the number of successful user purchases—and we’ll tell you why we believe IAPs are the way to go.

Why Promotion In-App Purchase instead of Ads

In-app purchases constitute one of the most widely used app monetization models. According to new statistics, an estimated 50% of non-game and 79% of game apps use IAPs to generate revenue. Indeed, there must be something about them if such an overwhelming majority of the apps currently available via Google's Play Store and Apple's App Store are free to download (in 2021, it was 96.7% on the former and around 93% on the latter). If freemium is the way to go, what is the best way to make the most out of your app?

In this article, you'll find out how best to promote your in-app purchase to maximize the number of successful user purchases—and we'll tell you why we believe in-app purchases are the way to go.

One way to approach promoting items or upgrades to enhance the experience of your app is based on the user's journey, or what's often called the user funnel. It's the trajectory from the user's first interaction with the app to first proper use, and eventually—if the user enjoys the mobile product—to repeated, regular engagement with it. Ultimately, it's up to your users to decide whether they like using an app, just as it is up to them to discontinue using it and delete it from their devices. The more users progress from one point to the next down the funnel, the greater your conversion rates.

If you rely on the funnel-based type of In-App purchase promotion, you assume the user will understand the value of the purchases you offer based on their previous experience of using the app. In other words, you trust that most of your users will figure out what it is they will get out of the transaction without actually having tested the offering.

The funnel is created by all the users that are using the app. Some of them are using more than others in different ways. Might use the app's basic features that are provided for free, and after a while, they might decide to go for the premium model to unlock extra features or avoid ads.

At the base of funnel optimization, the developer decides what the funnel is, and according to the selected funnel, the data structure is built. This means that the KPI and analytics are designed in order to measure the success of the funnel. For example, if the monetization on the app is around subscription, then the main KPI is the subscription payment, and those users' data will be used to design the funnel. So if 85% of the paying users have 12-day retention and they spend 20 minutes per day on the app, this will become the main KPI to track prior to the payment. The funnel will be built in 4 stages :

By definition, if you aim to measure one type of funnel, you eventually can improve it or decide it is the wrong course of action and build a new one. As this is the only path you optimized for, there are many assumptions that are taken for granted, and not all are measured or optimized.

What if the user gets confused by the offering, in any case? What if they don't enjoy their journey? Well, first of all, if this is the case, the user is unlikely to agree to purchase anything. And secondly, you'll need to improve the user funnel, which requires a great deal of development within the app. In this model, only a tiny fraction of users will interact with the offers of purchase or be convinced the purchased content is worth a try.

Statistics consistently show that mobile shopping carts get abandoned at exorbitant rates—it can be as high as 80%, or even higher, depending on the region, service, and type of mobile product. This tells you that even when app users get interested in the potential in-app purchase, most will hesitate and discontinue the transaction. That's why it's essential to invest and build a clear strategy for IAP promotion that keeps users excited and strong-minded about finalizing the purchase. 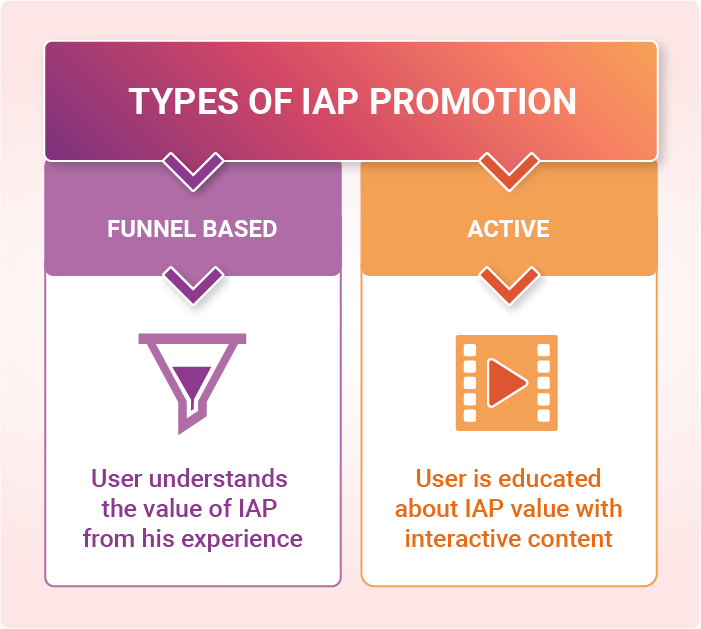 Active in-app purchase promotion is the kind of promotion that does not keep users in the dark about the actual value of their purchases. Instead, it reveals what they are investing in within the app to the user. For example, This can be done, by offering a free trial for a limited time, which gives the user a glimpse into what is available in their app journey following a purchase. Videos and interactive content can also be used. Active IAP promotion offers users a sense of control over how they invest in your app. But the benefits don't stop at greater engagement and spending on the user's part.

Once you allow the user to interact with the purchased content, you get actionable data about the value of the purchase and the impact of your promotions. Depending on users' reactions to the proposed acquisition and their interactions with the premium content, you may find out which kinds of promotion work and which ones need improvement. That's because you will be able to determine whether the users understood the value of the product or upgrade on offer, and you'll see whether they started the purchase process.

You can also test different content for purchase and count the interactions with each option, which will lead you to make better decisions regarding the development of your app and your promotional strategies. And finally, you will know the right times and places to situate your point of sale for in-app purchases.

You may be asking, why not just scale in-app advertising? Isn't that easier money? I need to add more reward Ads and lock the users. It may appear so. The critical thing to understand is that the revenue generated by ads is based on user action. The more activity there is the more money lands in your pocket.

But this simplicity comes at a cost. The value of eCPM (effective cost per thousand impressions) is not exactly something that lies within your purview – at the end of the day, you can't gauge the price of your users' attention. You don't know what kinds of ads your app is displaying either. With the widely applied header bidding process—with your advertising space being automatically auctioned off to the highest bidder—you have very little say about the content of the ads you display. To make matters worse, user interaction with the ads is hidden. Due to privacy restrictions, ad networks have access to fewer data, making it hard to optimize their ads. 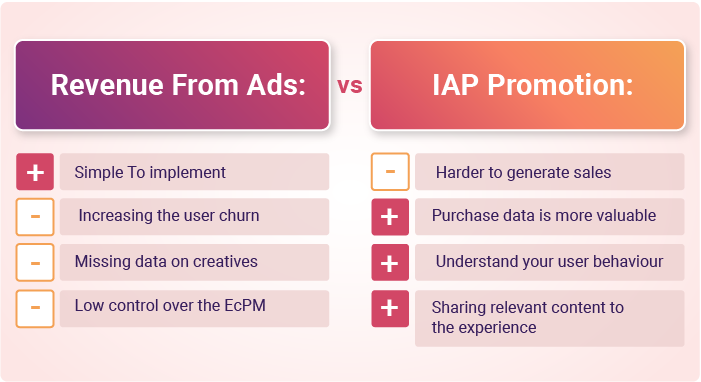 So, What's It Going to Be? Revenue from Ads or In-App Purchase Promotion?

Let's make a simple comparison: pure numbers and a little speculation. Let's imagine a group of your second-day retention users. Let's assume we're looking at 1,000 users, and let's also take 10 out of the 1,000 to make an in-app purchase. The same 1,000 users generate five ad views per session on the app. Assuming that those 1,000 users participate in two sessions per day, this gives us 10,000 ad impressions within a day. If your average ads eCPM for 10,000 impressions for this group is 3 US dollars, you've earned yourself $30 (that's 10,000 divided by 1000 and multiplied by 3).

Moving on to the purchase, let's imagine a simple, unthreatening in-app purchase for $2.99. If the 10 of 1000 users we've mentioned do make a purchase, you'll get the same money you've earned in your ads revenue. But since your ads money is generated per install, you need to trigger 30 installs on average to make every 3 dollars. However, if you use in-app promotion informedly, with an appropriate strategy, you may assume that around 50% of your installs will translate into an in-app purchase. So, with 30 installs, you get 15 purchases for $44.85. Rounding it up slightly, you get a 150% higher payout without relying on colossal user acquisition, and all of this without the complicated process of Ads integration. The actual value of IAP promotion has become a bit clearer now, hasn't it?

Here is another table to illustrate another point of view on this matter: 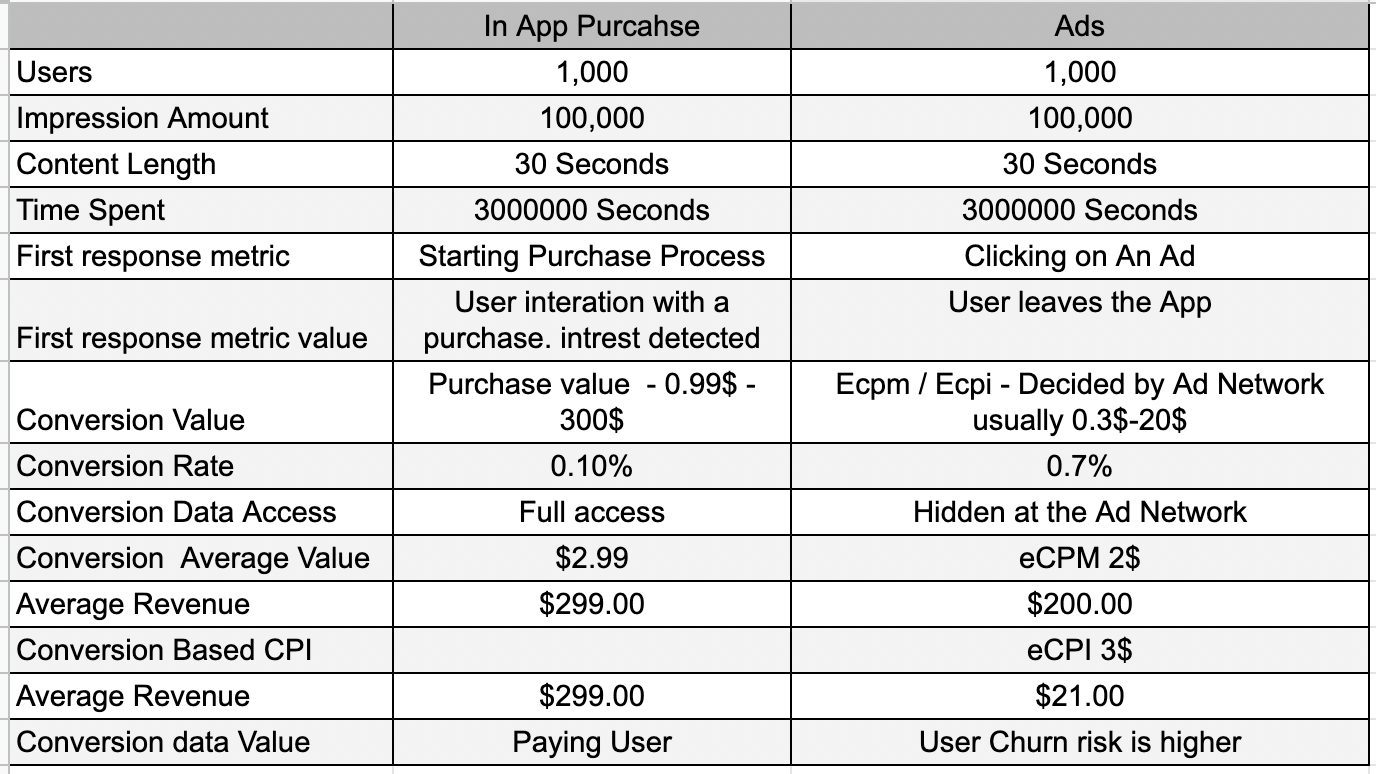 While you're counting your revenue, remember that with in-app purchases, you don't just get monetary profit, you also get data on users who went for the purchase. So you learn which message stimulates the user to interact and invest in the app. And it's not some third-party data you are getting—you get full ownership of it and can react accordingly.

The True Value of In-App Purchases

In this article, you’ll find out how best to promote your in-app purchase to maximize the number of successful user purchases—and we’ll tell you why we believe IAPs are the way to go.